I was writing posts of my Japan trip in sequential order.  Then I got a little bored with doing so, became distracted with doing a bunch of other stuff, and now I am trying to get back to finishing up the Japan posts.  I still have one or two more meals in Kyoto that I would like to write about, before going on to Takayama.  But I have decided to fast-forward and move on to Tokyo. Abura Soba.  The first meal that we ate after arriving in Tokyo from Takayama on the shinkansen.  The journey took us several hours and one change of trains at Nagoya.  We alighted at Tokyo Station and took the Yamanote Line to our hotel, Royal Park Shiodome at Shimbashi station.  Thank goodness the ride from Tokyo Station to Shimbashi station is a short one ‘cos managing two large suitcases on the crowded Yamanote Line was quite a stressful exercise.   The great thing about staying at Royal Park Shiodome is the accessibility to three subway stations.  The hotel is connected to the Shimbashi station on the Yamanote Line, the Ginza Line and the Asakusa Line.  If you fancy having a sushi breakfast early in the morning, Tsujiki Market is just a short walk away.  And last point in favor of Royal Park Shiodome – it is one of the few hotel stops on the Haneda airport limousine route.  The rooms are a decent size and affordably priced.  This hotel is definitely my first choice in Tokyo in the future. Back to Abura Soba.  We arrived in Tokyo slightly after lunch, and were feeling hungry after dropping off our bags at the hotel.  I wanted to eat cakes at HARBS but the outlet that we visited in nearby Yurakucho was packed.  So we decided to look for Abura Soba at Akasaka-Mitsuke which is on the Asakusa Line.  We got slightly lost and frustrated trying to look for the right exit in the Akasaka-Mitsuke station – it is quite a huge station – which would lead us to Abura Soba.  Finally, we spotted this big, flashy signage which meant that we had arrived at our destination.

I was ravenous, but couldn’t really figure out how to place the orders using the vending machine.  There were so many options, and I gave up trying to work it all out on my own with my very basic knowledge of Japanese.  The staff helped us out, and before long, two luscious bowls of ‘dry’ noodles, topped with an onsen egg, scallions, bamboo shoots, nori and thin slices of charsiu were placed before us.  We were instructed to toss the noodles and eat.

Abura means ‘oil’ in Japanese.  Unlike the name suggests, these noodles did not taste at all oily, at least not in the way that I would associate ‘oily’ with food.  Unctuous, but not oily. I have no idea what goes into the sauce.  I suppose it is a special sauce containing ingredients that I can only hazard a guess as to what they are – chili oil, vinegar, soy sauce, *i give up*.  Mixing the sauce, the gooey onsen egg and the rest of the ingredients together gave the bowl of noodles an incredible flavor.  I usually avoid these fat yellow noodles ‘cos I don’t like the texture and taste, but these ones were so springy and light, like fat versions of Hakata ramen. It was an immensely delicious and satisfying meal.  I wanted to pick the bowl up and lick it clean. Directions: Alight at the Akasaka-Mitsuke Station on the Ginza Line or Marunouchi Line. Leave the station at Exit #10. You should see a BIC Camera store ahead of you. Turn right after BIC Camera and before long, you will see the huge 油 signage of Abura Soba (see above). 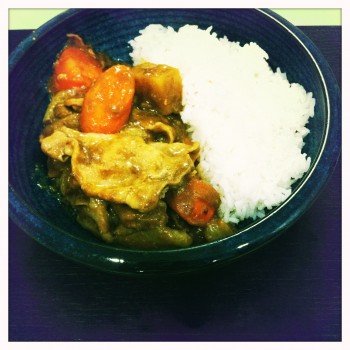 Galettes & Crepes At The Daily Roundup